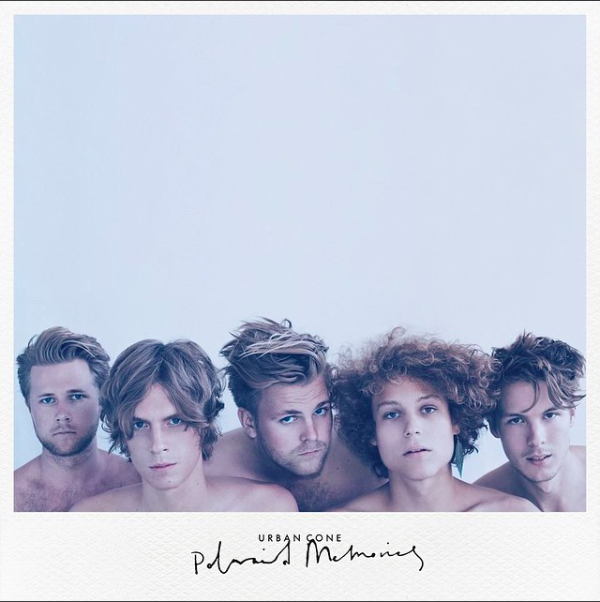 Back in 2013, the Swedish synth-pop group Urban Cone rocketed us into the hormone-booming teenage cosmo with their first album Our Youth. While there were laudable instances – like in “Freak” and “We Should Go to France” where we felt the vicarious chills of Sweden and longing for France’s warmth that a Northern European lad grew up with – overall, it was another PG-13 existentialism that fluctuated between brazen optimism and underage crisis. On their second LP, Polaroid Memories, the electropop quintet have jettisoned from the rite-of-passage territory and landed into the flummoxing cusp of juvenescence and adulthood where they are nostalgically moving forward, still oozing the bouncy thumps but not chanting as idyllic as before.

Our Youth was an auditory continental breakfast – you would listen within earshot, but would not actively seek it. Polaroid Memories’ first single, “Sadness Disease” – which aired back in June – seems to mimic the antecedent works by exuding the same synth-coated upbeats that you’d hear in bonfires, pool parties, or any Kodak ad-worthy occasion. But as soon as the frontman Gustafsson asks, “I’ve got this sadness disease, / How you gonna cure me?” the undercurrent of distress contradicts the festive ambience. The juxtaposition of the enthusiastic melody and crestfallen choruses encapsulates the ambivalence of aging – we all grow up anticipating an exhilarating, shit-altogether stage and when the idealization is not met, the dissatisfaction often becomes an ugly obsession that plummets us into a state of sadness. “Sadness Disease” lures us with its cheerful unhappiness, ensnaring the camouflaged insecurities and multiplying doubts found beneath maturity.

Urban Cone artfully indulges in nostalgia by framing whatever memories with electro jingles so they don’t feel like maudlin snapshots. “I used to feel it, you used to feel it,” insists Gustafsson in “Weekends” where he longs for a hometown that has now turned into an alien realm as time metamorphoses everything at an indigestible rate. Unlike ruminating solo as they did in Our Youth, the group teams up with fellow Swedish pop singer, Tove Lo, in “Come Back to Me.” While narcotics and heartaches have become her signature, “Come Back to Me” allows her to forgo the self-saboteur label and reminisce for past relationships with a more reflective demeanor. “The million ways that I and only I know you / When did we grow old?” she asks in her booming, edgy voice that retrofits Gustafsson’s high pitch. The mid-tempo saxophone interludes amid the sputtering percussions resonate the duo’s struggle to keep up with the pace of years.

Alongside the heartaches for the past, there’s a newfound hope that is emblazoned with the sense of surprise, insinuating how both gains and losses are unexpected. Atop the disco sci-fi funkiness, “We Are Skeletons” professes to a beloved “There’s nothing we can do as I love everything about you,” wallowing into a new romance. “Treasure” multi-voicedly recounts a lovey-dovey eureka, oohing at the discovery that whatever they’ve been looking for “was right here in between us.” Opposite to “Weekends” where Gustafson reminds how “you used to feel it,” in “Rocketman” he boxes you in the present where “You can feel it, you can feel it” before pushing you to “Take a chance I’ll make it alright.” Melodically, it is the most electro-laminated track that free-spins at the precipice of falling into hogwash rhythm but – luckily – it backs down just in time to only remain in an inchoate un-matching state. These are the sweeteners abating the bitterness, which mirror much of Our Youth’s wistfulness, evincing the still-ripening vision of young adult mentality.

While Polaroid Memories exhibits an en ponte balance of aerated unhappiness and flicky heart-fueling ballads, without the hypersonic electro-stacked base, the tracks dissolve into exhaustible ennui. “Robot Love” recounts how a once ardent liaison has turned into a lackluster remnant, but the dragging banaustic tone nails the barrenness better than the words. The hushed “You Build Your House Out of Cards” fades into a dullsville lullaby despite Gustafsson’s effort to illustrate a sensitive downfall. Yet the last track, “Never Gonna See You Again,” wangles what the previous two failed by transitioning debonairly from orchestrating ricocheted beats to unhurried, finessed tracks. “Follow me I’m moving on. I’m moving to the place I’ve been dreaming of,” imparts a wiser voice that is now embarking towards a destination he would’ve only daydreamed in Our Youth.

The cones manage to sally forth from their prep school years and accept that the heftiest lesson of growing up is leaving behind. More often, when bands mature they tend to shed away the adrenaline-pumping rhythm and descend to mid-tempos to match the dwindling youthful optimism. But the quintet does not drop down from the high tempos and continue assembling chromatic electro aura as they branch out – with slight klutziness– to slower cadence. Urban Cone mentioned that Polaroid Memories was an album they needed to produce to come together once again as a band – and this is certainly irrefutable. It is a memento of what they lost and a guide that the path ahead is not perfectly flat as they imagined, but has few bumps they need to learn to face with each other.